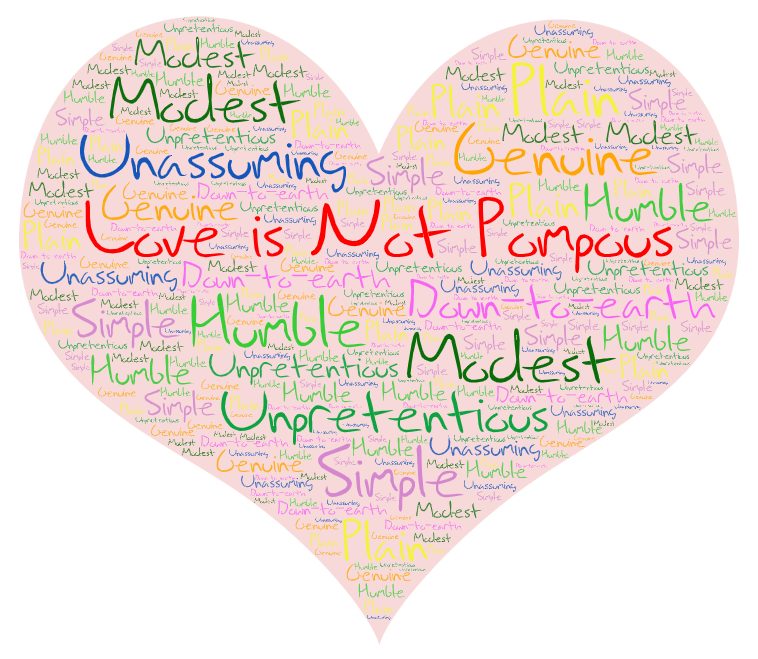 Love is Not Pompous

Have you heard of a dark star?

According to Dr. Katherine Freese, astrophysicist, professor, and dark star researcher at the University of Michigan, dark stars are similar to normal stars’ composition, mostly hydrogen and helium, except for one thing.

Dark stars were likely to be giant, puffy clouds with a diameter that could reach as large as 900 million miles in diameter. Dark stars could shine exceptionally bright, even ten billion times more luminous than our own sun.

While scientists don’t think that dark stars still exist today, dark stars are believed to be the seeds of black holes found in space.

No one really knows for sure because to prove a black star’s existence, astronomers would need extremely powerful telescopes capable of observing an extremely distant past.

So how do dark stars relate to love being not pompous?

Just what is pompous?

I think you see pompous when you hear it.

The “I know more than you’ll ever forget” type of person whose vanity is over the top.

Someone who acts superior by putting others down.

Or you might hear someone who is pompous who does things for appearance’s sake, or for the show, only.

Overly dressed. Seeking to be the center of attention all the time, no matter the situation or the circumstances.

Where can you experience love with a pompous person in a relationship?

The fact is there is a lot of love.

Except that love is only one way, not a love of equals.

The object on either side of the equals sign has the same value.

Not so with a person who acts in a pompous manner.

That math equation is not one of equals.

Me better than you.

Me greater than you.

The light gets taken by the pompous person, and nothing that gets reflected back to you.

Much like a black hole, which sucks things in where they get trapped and can’t escape.

Self-love, self-obsession, and self-importance make up the clanging gong that gets your attention, but what is annoying and irritating to hear.

The irony of arrogance is that although it appears grand, like a dark star’s brilliance, it leads to sucking all of the attention its own way, like a black hole.

The contrast to a pompous person is a humble person.

Love that is not pompous is equal, unassuming, open to others, and down-to-earth.

Love that is expressed to another person without fanfare, blowing trumpets, or clanging gongs.

Love recognizes that the other person’s value is as high as the one giving expressions of love.

The key thing to remember is love is giving, not displaying or parading.

Love is the expression for the benefit of the other person, not just the giver.

Yes, we receive back from loving, but that is a side effect – a reflection- not the main reason to love.

But he was aware of the reality of how the darkness of arrogance, conceit, and vanity affected the quality of love.

Let’s not get sucked into the trap of appearances when it comes to loving others.

Click the underlined text to read about the next attribute of love, “Love is Not Inflated.“

This website uses cookies to improve your experience while you navigate through the website. Out of these, the cookies that are categorized as necessary are stored on your browser as they are essential for the working of basic functionalities of the website. We also use third-party cookies that help us analyze and understand how you use this website. These cookies will be stored in your browser only with your consent. You also have the option to opt-out of these cookies. But opting out of some of these cookies may affect your browsing experience.
Necessary Always Enabled
Necessary cookies are absolutely essential for the website to function properly. This category only includes cookies that ensures basic functionalities and security features of the website. These cookies do not store any personal information.
Non-necessary
Any cookies that may not be particularly necessary for the website to function and is used specifically to collect user personal data via analytics, ads, other embedded contents are termed as non-necessary cookies. It is mandatory to procure user consent prior to running these cookies on your website.
SAVE & ACCEPT